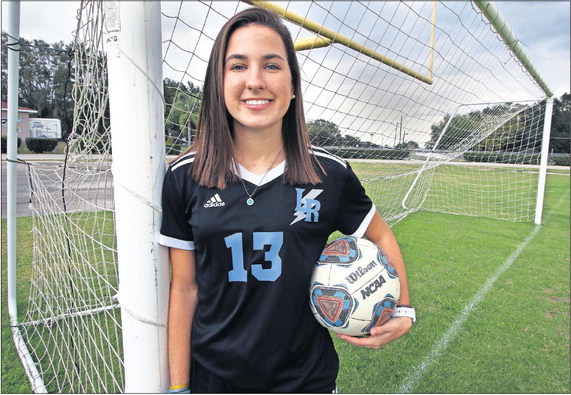 You can’t coach speed, but a player needs more than just great speed to be a record-setting goal scorer.

Logan Fernandez certainly has more than great speed. She has developed a great technical game too that allowed her to not just become Lake Region’s all-time leading scorer, despite injuries in two seasons, but she’ll go down as one of the top players to play girls soccer at Lake Region.

Fernandez’ high school career is winding down as Lake Region plays in the Class 4A, District 12 girls soccer tournament that begins this week. Although injuries slowed her senior year, it became more memorable when she learned last week that she became the school’s all-time leading goalscorer late last season.

‘I think that’s so cool,’ Fernandez said. ‘I love having the opportunity to do that. I was surprised. I had no clue to what the school record was. I’m excited about that.’

With or without the record, however, Fernandez already was poised to graduate as one of the top girls soccer players in the school’s 25-year history of the program. She’s on a subjective short list that includes — but not limited to — sisters Amanda and Calista Wetherbee, Erin Hopkins and Rhiannon Pugh.

What is not subjective is that when Fernandez scored 44 goals last season, a single- season record, she passed Amanda Wetherbee and Hopkins to become the Thunder’s all-time leading goal scorer.

With 26 more goals this season, despite missing time with injuries, she now has 118 career goals. Amanda Wetherbee set the mark of 72 goals in 2001 when she graduated, and Hopkins tied the record in 2005. Pugh fell just short with 66 career goals.

Fernandez began playing soccer when she was 5, starting out in the Auburndale rec program before moving on to club soccer. She also did gymnastics and dance but eventually settled on soccer. First a defender, she became a forward and soon developed a scoring knack.

‘It took a while getting used to because it two completely different things, but yeah, I like it better,’ Fernandez said of the move to forward.

Her speed was the main reason she moved to forward when she was young, but she has advanced far beyond being just a player who can outrun a defender.

‘She’s become a lot smarter and very creative, not just going straight to outlet someone on the run but being smarter in how she tactically goes about the player,’ Lake Region coach Julia Valentine said. ‘She breaks them down then mentally and just wears them down after that.’

With the ball, Fernandez is a versatile player.

‘Her technical work with the ball at her feet is every good,’ Valentine said. ‘It doesn’t matter if it’s on the left side or the right side. Both shots from the left foot and the right foot are going to be the same speed and the same toughness. And with her sprints, she has a whole-other speed. I don’t know how she does it. She just turns it on. It’s like she’s watching everyone else in slow motion.’

The combination of speed and great technical skill makes her an offensive force.

‘My speed definitely helps me with the confidence to shoot because I usually have quite a bit of space once I get in there,’ she said.

As impressive as Fernandez’s goal-scoring tally is, she might have broken the record sooner and have more career goals were it not for injuries.

Fernandez, who scored 23 goals as a freshman, had 25 goals as a sophomore before being injured just before Christmas.

‘It was tough watching them (teammates) go out and play,’ she said. ‘I hate sitting on the bench and just watching.

After scoring 44 goals last season, Fernandez was recovering from an injury when practice began in late October. She got off to a strong start to the season and had 19 goals before getting injured in mid-December. She has added seven more goals in three games since returning.

Fernandez partially tore ligaments in her ankle both times.

The Thunder made the playoffs as district runners-up and the district championship game against Auburndale remains a high school highlight despite the loss on penalty kicks.

‘That game was a lot of fun to play,’ said Fernandez, who had one of the team’s two goals. ‘The pressure was so high. It was a great game. I loved that game. It was probably my favorite game because it was so close.’

Fernandez’s senior season has been enjoyable, despite the injuries, in an even bigger way other her individual accomplishments. For the first time, she and her younger sister Dylan, a talented freshman, are teammates.

‘I loved that,’ she said. ‘For a minute, it took me to get used to her being on the field. I’m glad I got to do that my last year, playing with her.’

Fernandez hopes to play college soccer. She participated in a combine at Florida Southern over the weekend. Both Wetherbee and Hopkins, who started at UCF, played soccer and graduated from Florida Southern.

‘I’ve seen the school and really like it,’ she said. ‘And it’s close to home.’